Næste indlæg
CPH HALV MARATHON..!!! and i am going to run it! I have never run this far nor have i competed in su

OMG My little baby is turning 1 today! Where did that year go?! It seems  like yesterday she was born!

I am going to share her story with you, it was the hardest time of our lives and THANKFULLY we are fast it!..

Sofie’s birth was a bit dramatic, nothing like we had expected. We had planned a water-birth and home the same day plan, but turned out to become a whole different birth plus a two week long stay in the NICU.

After I had my epidural put in, things stared to change.. the doctors needed to take a blood test off Sofie while she was still inside me and to do that, there had to be 4 doctors running back and forth with these tests. For me it was uncomfortable to be watching! I had started to develop a fever spiking at 41, which resulted in my body going into a form of chock. My body was shaking uncontrollably and I was told that if I didn?t control the shaking, they would have to perform an emergency C-section. I tried to get the shaking under control but I couldn?t control anything, and then Sofie got stressed! All of a sudden there were a lot of nurses/doctors in my room prepping me and Joakim (who had to have a blue jump suite on) for a C-section. We got driven away into a room where we were met with another load of hospital personal ?ready to go?.

Sofie came out 02:12, they gave her a score of 10 out of 10 and after she had been checked though, Joakim got her in his arms and came over to me so I could see her. He was sat with us for what feels like a second and then the doctors said she wasn?t breathing right and then they took her.. for the next 4 hours I didn?t see her or Joakim. I got ?put back together? and driven to post operation room, where my mum came to sit with me. Thankfully our mothers were here for it all (as they were for Noahs birth too)! So my mum stayed with me, whilst Joakims mum was with him and Sofie in the NICU. I got updates though my mum on how it was going and after Sofie was settled in, Joakim came down to see me. This was just as hard on him as it was on me. When he went with Sofie, he had to leave me on an operation table alone with a load of doctors.. I can only imagine how that must have felt!

When I was finally ?released?, I was not prepared for what I was about see.. I came up to her room and there were doctors and nurses, Joakim and his mum surrounding her ready to greet me.. and I was being wheeled in on a bed, so it was taking FOREVER! When I finally got over to her, she was coved in different instruments! One was helping her breath properly, another was giving her food, she had instruments to monitor her all over her chest and she had a drop in her foot for her medicine .. and I wasn?t allowed to pick her up! That feeling of having no power, not be able to hold your new born.. who was in pain? I can?t explain the ache that was in my heart! It was the hardest time of my life! I got to hold her later that day, but she wasn?t aloud off any of those instruments, so holding her was so hard! I couldn?t pull her close or keep her in my arms for long. I cried for 4 days!

It turns out that Sofie was on the verge of Meningitis (a brain illness), but because she was treated so fast, it never developed any further. She had also caught a bacteria from me (which also made me ill), which made her ill as well. The doctors said that she was in pain and needed rest! So she had to be on painkillers for two weeks and it was a very minimum of visitors she was allowed, just the closest from the family. What made things worse was not being able to be home with Noah! Every time him and Joakim came to visit, I couldn?t stop crying! It wasn?t fair for Joakim and it was not fair on Noah! So when they said we were allowed to go home (but still coming back for the medicine 3 times a day) I was over the moon!

We weren’t prepared for our homecoming, so Joakim wanted to rush back to get the car, but I hadn?t been outside for over a week ? so I just wanted to walk! I have never appreciated being outside as much as I did that day!

And when Noah came home, everything finally felt right! Our family was finally whole and we were home! Best day ever!

Sofie is thankfully heathy, happy, curious, cheeky and growing up too fast!

Something I learned from that experience:

Appreciate the little things in life, the moments you spend with your loved once and don?t let practical stuff cloud your head.

The past year has been so much fun (apart from the first two weeks)!

We love you to the moon and back!

Thank you for reading <3 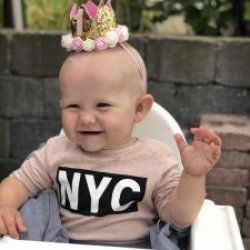 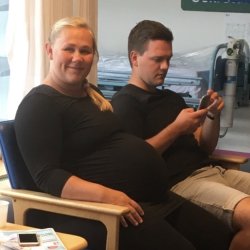 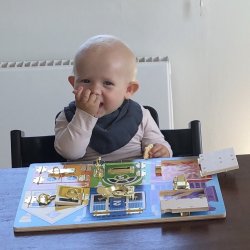 CPH HALV MARATHON..!!! and i am going to run it! I have never run this far nor have i competed in such a big event. I have …
Læs mere